In this full day taxi tour we will visit the famous Sparta and Mystras!

Sparta was a prominent city-state in ancient Greece. In antiquity the city-state was known as Lacedaemon, while the name Sparta referred to its main settlement on the banks of the Eurotas River in Laconia, in south-eastern Peloponnese. Around 650 BC, it rose to become the dominant military land-power in ancient Greece.

Sparta was unique in ancient Greece for its social system and constitution, which configured their entire society to maximize military proficiency at all costs, and completely focused on military training and excellence. Its inhabitants were classified as Spartiates (Spartan citizens, who enjoyed full rights), Mothakes (non-Spartan free men raised as Spartans), Perioikoi (free residents, literally “dwellers around”), and Helots (state-owned serfs, enslaved non-Spartan local population). Spartiates underwent the rigorous agoge training and education regimen, and Spartan phalanges were widely considered to be among the best in battle. Spartan women enjoyed considerably more rights and equality to men than elsewhere in the classical antiquity.

Our taxi tour will continue to Mystras.  Mystras or Mistras is a fortified town and a former municipality in Laconia, Peloponnese, Greece. Situated on Mt. Taygetos, near ancient Sparta, it served as the capital of the Byzantine Despotate of the Morea in the 14th and 15th centuries, experiencing a period of prosperity and cultural flowering. The site remained inhabited throughout the Ottoman period, when it was mistaken by Western travellers for ancient Sparta. In the 1830s, it was abandoned and the new town of Sparti was built, approximately eight kilometres to the east. The archaeological site stands above the modern village of Mystras and the city of Sparta. The greenery surrounding the area is composed mainly by pine trees and cypresses. Some small rivers and lakes are found in the region. 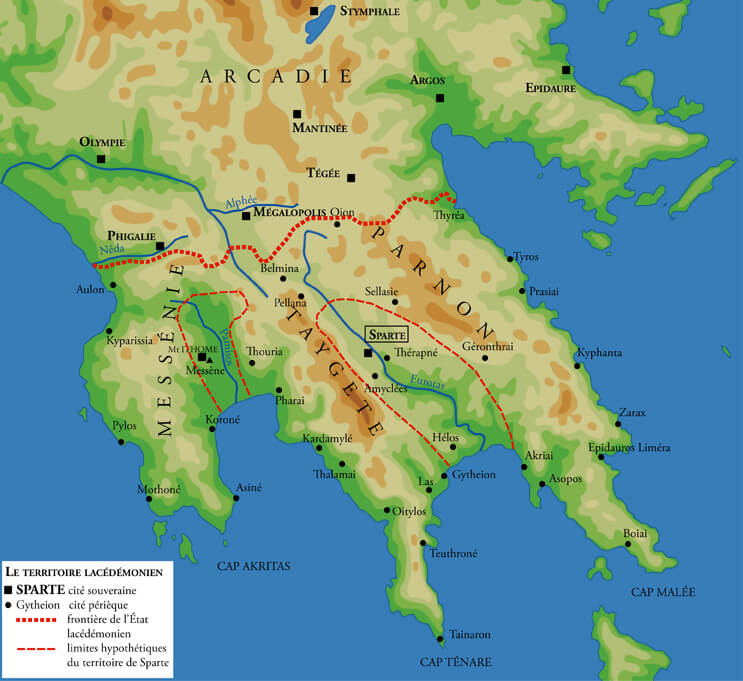